John Ross was the first and only elected Chief of the Cherokee Nation from the time it was formed until his death in 1886.

Ross had a private tutor in his youth.  Although he was only one-eighth Cherokee he always treasured his Indian ties.  He was one of the richest men in North Georgia before 1838.

You can see one of his restored houses today at Rossville, Georgia, 30741.  His other house at Rome, Georgia was confiscated during the Georgia  Lottery.  It must have been spacious and beautiful.  It was seized when Ross was away and when he returned home his wife and children were confined to a room upstairs.  At that point Ross moved across the border to Tn. 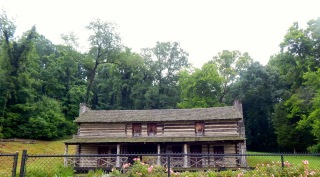