Jesus Loves All of Us – This I Know!

Jim Dant, Senior Minister of First Baptist Church of Greenville, South Carolina, in his book This I Know, A Simple Biblical Defense for LGBTQ Christians, (Nurturing Faith 2018) has given us an alternative interpretation of biblical texts often quoted to condemn members of the LGBTQ community.

Dant’s small volume is not intended to be a thorough theological discussion of sexuality in the biblical text.  Rather, it is a survival manual for those on the firing line who want to articulate why the Bible supports inclusion of the LGBTQ experience and community when so many Christian groups “turn the Bible into a weapon.”

In the first half of his book Dant exposes nine Biblical texts frequently quoted to castigate LGBTQ persons.  One by one he knocks down these strongly held opinions.

In the second half of his book Dant deals with five ridiculing statements aimed at churches that elect to become welcoming and affirming.  This is where the most vocal adversaries of the LGBTQ community reveal their shallow understanding of what it means to be a Baptist.

Dant concludes there is no valid, Christian, biblical argument against same-sex relationships between consenting adults and that each Baptist church congregation has the right to decide how it will practice faith under the leadership of God’s Spirit. 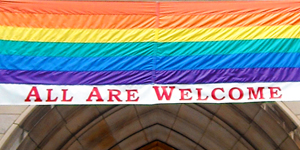 As the sister of a gay brother and mother of a gay son, I heartily endorse This I Know as a much-needed resource for all Christians, especially those who are all too certain their condemnatory stance on homosexuality is the only Christian response.  When I came to the Christian faith realization that I, rather than my gay son, needed to change, a boulder size burden I had been harboring was lifted.  This epiphany encouraged me to share my story in Tarnished Haloes, Open Hearts (Nurturing Faith 2012).

By publishing this electrifying small volume as well as giving away free copies of it at the Co-operative Baptist Convention of June, 2018, Nurturing Faith has taken a bold step forward in giving voice to an alternative scriptural view of a “hot button” issue in our country.

Nurturing FaithJournal and Bible Studies Editor John Pierce states, “We’re witnessing an ongoing debate over biblical understandings of homosexuality and gender identity.  To avoid divisions, we’ve tried to tamp it down to avoid division yet it keeps bubbling up like a well-pressured geyser that refuses to be calm.  This debate is about more than an issue: it affects people.  Putting people first may feel like a compromise of conviction to some.  But it sure seemed to be the priority of Jesus.”  Pierce concludes, “Each case involves people declared to be less worthy of the church’s full embrace and the opportunity to follow the call of God’s Spirit on their lives.  Real people.  God’s people.  Children of God.”

Additional resources on religion and faith as it pertains to the LGBTQ community (click on the logo or text):