All of my books may be purchased online directly from my publisher, Nurturing Faith, at the link below each description.  They are also available at Amazon or Barnes & Noble. (ebooks & Kindle versions also at these links.)

My most recent books: Trailblazer Trilogy chronicles the personal and civic struggles and successes of Noble Wimberly Jones, colonial Georgia’s premiere doctor and statesman for American independence.  The Trailblazer trilogy brings to life the powerful story of an important Georgia statesman – Noble Wimberly (N.W.) Jones – and illustrates his contributions to the common good of a growing colonial community. Travel with young N.W. on his family’s perilous voyage to establish the Georgia colony where he becomes both a thriving doctor and a political activist against England’s excessive taxation and, ultimately, a founder of the Georgia Medical Society.  Appropriate for both middle school and young adult readers, this compelling narrative is certain to engage booklovers drawn to the trilogy’s historical arch.

In Trailblazer: Part Two, N.W. Jones’s political involvement imposes limits on his medical aspirations. N.W.’s mentor, Doctor Samuel Nunis, fears the outcome of a war with the Spanish and flees the colony while N.W. becomes part of General James Oglethorpe’s ill-fated invasion of Saint Augustine.  Two years later a miraculous English victory is clouded by General Oglethorpe’s exit to England, leaving N.W. to placate a jilted Creek Princess Mary Musgrove.  The stakes grow higher when Mary and her Creek warriors hold the city of Savannah hostage for a month. Georgia becomes a Crown colony shortly after N.W. begins his long-awaited apprenticeship with his father and also marries Sarah Davis. Soaring and conflicting political viewpoints strain N.W.’s relationship with his father and with England. Purchase directly from the publisher, Nurturing Faith. [Ebook or Kindle] 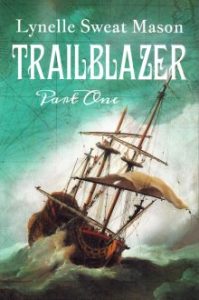 Trailblazer: Part One, the journey begins. The then 10-year-old Noble Wimberly (N.W.) Jones and his family begin their bold journey from their home in Lambeth, England to settling into the new Georgia colony in America as members of the first group of early colonists. This volume begins with young N.W. awaking to a heated discussion his parents are having about the latest English colony, Georgia. Noble, Senior wants to go with his friend James Oglethorpe to set up the colony. His mother, on the other hand, lays down her ultimatum: either they all go or no one goes. Father relents and the roadblocks to fulfilling N.W’s desire to become a doctor become evident. This volume covers the challenging but, ultimately, rewarding beginnings in the new colony. Purchase directly from the publisher, Nurturing Faith. [Ebook or Kindle] 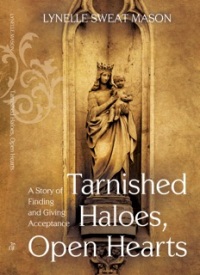 Laced with love and laughter, Tarnished Haloes, Open Hearts is a story of giving and finding acceptance in people and places behind the common masks of fragile humanity. Through poverty, personal losses, and persistent “divine hungers,” this unvarnished story captivates and inspires readers without superficiality or pretense. Lynelle Mason’s refreshingly honest account of her remarkable life experiences is blunt, compelling, and hopeful. Read a compelling review by the editor. Purchase directly from the publisher, Nurturing Faith. [Ebook or Kindle]

Where the Rabbits Dance is a riveting story about a young Cherokee girl who helps save her family through ingenuity, cunning, and spiritual insight. Twelve-year-old Lightfoot, a Cherokee maiden, looks on in horror as her family’s house lies in ashes. What would you do if a stranger stormed into your home and ordered you to leave? What if that person was armed and had the backing—and blessing—of the federal government? Would you acquiesce or fight? Purchase directly from the publisher, Nurturing Faith. [Ebook or Kindle] 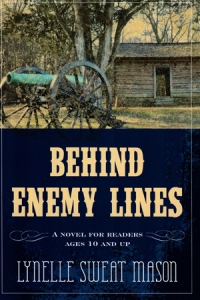 Behind Enemy Lines is a novel for readers ages 10 and up, this is a historically accurate story of how the Civil War came to Chattanooga TN and North Georgia. The story is told from the point of view of a 12-year-old boy named Bobby who is on a journey to reunite with his father, who is serving in the Confederate Army. Perfect for upper elementary and middle school students who are learning about the Civil War. Purchase directly from the publisher, Nurturing Faith. [Ebook or Kindle]

Advent Encounters is perfect of use in worship throughout the season … or even in Bible studies, youth groups, or for children’s church … these 13 brief monologs bring Biblical characters to life.  Characters include: Simeon, Joseph, Micah, Isaiah, Caesar Augustus, Anna, King Herod, Elizabeth, Zechariah, Mary, an Innkeeper, Benji (a stable boy) and a character called The Seeker.
Costuming and staging suggestions are included, as well as speaker notes.  Includes a CD-ROM in RTF format.
Order directly from the publisher, Creative Communications for the Parish. 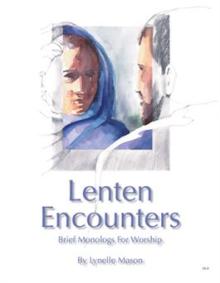 Lenten Encounters is perfect for use in worship throughout the season … or even in Bible studies, youth groups, or for children’s church … these brief monologs bring Biblical characters to life. More than a dozen characters from the passion of Christ are included!

Costuming and staging suggestions are included, as well as speaker notes. Includes a CD-ROM in RTF format. Order directly from the publisher, Creative Communications for the Parish.